McLuhan and The Manitoban: Home 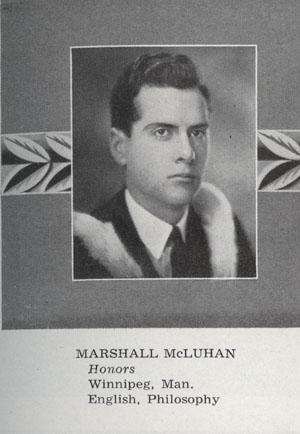 For a young man living in a relatively isolated, medium‐sized city, the young McLuhan shows a remarkable breadth of vision, as evidenced in “Interview with Dr. Johnson” and “Germany’s Development”. Even at this early stage of his career he is sceptical about the effects of technology, as in “German Character” and, especially of modern communications technology. As he makes clear in “Criticize Milton?” McLuhan, the young adult, is not an uncritical fan of technology’s effects on popular culture.

Yet paradoxically, as in “Germany and Internationalism” and “Macaulay – What a Man” McLuhan speaks the language of his culture, taking delight in using self-evident hyperbole, and having a natural penchant for pithy aphorisms.

Foreshadowing his often self-deprecating wit that so baffled both his admirers and critics, he writes “Morticians and Cosmeticians” with a mock confidence and bravado.

Not lacking in either authenticity or courage, McLuhan, even at an early age, delights in being a contrarian, a provocateur, as evidenced in a number of articles but particularly in “Germany and Internationalism”, and “George Meredith, Feminist?”.

Despite eventually becoming somewhat of a performance artist who enjoyed the limelight of public exposure, McLuhan at first obscured his deeply personal leanings towards religious conviction. However, there is strong evidence, even in his public writings as a student, that his soul was stirring in towards religious beliefs that eventually formed his world view. See his article on “Not Spiritualism but Spiritism “ and “De Valera”, his reference to G.K. Chesterton in “The Morticians”, his definition of agnosticism in “Germany and Internationalism”, and his allusion to moral principles in “The Groupers”.

Finally, the young Marshall McLuhan was a proud Manitoban, profoundly enamoured of the Prairie skies, and with high hopes for Canada to take its place among the cultured nations of the world. This he illustrated in the two extant essays in a literary journal, “Heaven’s Above!” and “A Grand Tour for $300”.

McLuhan is widely recognized as the pioneer of contemporary media studies, including media literacy, who coined or popularized such phrases as the Global Village and the Medium is the Message. He was brought up in the Fort Rouge area of Winnipeg and received his Bachelor’s and Master’s degrees from the University of Manitoba. This year, his life and work are being celebrated from Bangkok to Brussels to Berlin.

Read handwritten annotations by McLuhan throughout Macaulay's essay on Addison

'Toba Issues can be found in the archives.