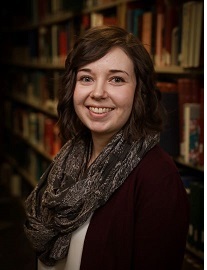 Sarah Clark has been part of the University of Manitoba Libraries since 2012.  She is the Learning & Instruction Support Librarian, and has previously worked as the Liaison for the Faculty of Kinesiology and Recreation Management and Department of Women's and Gender Studies.  Her current research involves integrating scaffolded assignments at both the course and curriculum levels and exploring librarians’ roles in the delivery of academic integrity instruction.

Clark, S., & Penner, K. (2017). Assessing an event: Mixin’ it up with the Long Night Against Procrastination. In A. W. Dobbs (Ed.). The Library Assessment Cookbook. Chicago, IL: ACRL Press.

Block, K., & Clark, S. (2016, May). Long Night Against Procrastination at the University of Manitoba. Presented at the Association of College and Research Libraries' North Dakota-Manitoba Chapter Symposium, Winnipeg, MB.​

Albrecht, V., & Clark, S. (2015, March). Acclimatizing new librarians through mentoring: Is it sustainable? Presented at the Association of College and Research Libraries Conference. Portland, OR.