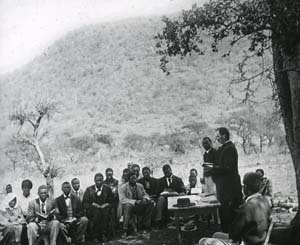 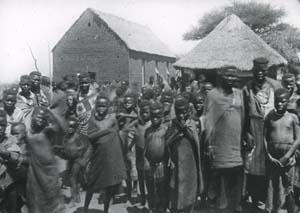 The Emil and Lynette Hain fonds consists of a collection of glass slides created by Ms. Hain's grandfather, Rev. Thomas Featherstone Watson, who documented the missionary work being undertaken in the Transvaal region of South Africa prior to the onset of the Boer War in 1899.  Rev. Watson created glass slides from his original negatives and used them as the basis of his lecture tour titled "Missionary Labours in the Transvaal Before the War: Glimpses of Missionary Life in the Transvaal."  The Hains donated a set of glass slides and Rev. Watson's lecture notes to University of Manitoba Archives & Special Collections in 2010.  The glass slides were then digitized.  The accompanying lecture notes, which describe each slide in greater detail, will be digitized at a later date but for now are available for research at the archives.

The scenes depicted in this digital collection include the South African people, culture and countryside, churches, church services, European and South African ministers, and other glimpses into missionary life in South Africa.  The rare and fascinating images in this collection provide some insight into the controversial practice of missionary work in a little-seen region of the world just prior to the outbreak of a violent war only a few years later.

Read a description of the Emil and Lyntte Hain fonds