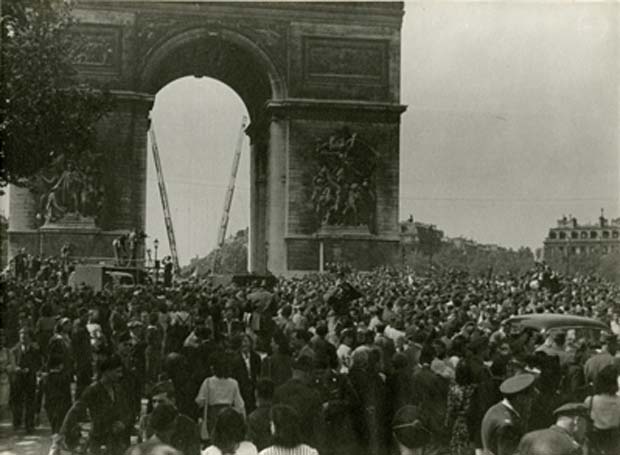 Hilda Morrish grew up in Hove, England and joined the Women's Royal Naval Service in 1940. Morrish's parents were pacifists and disapproved of her joining the WRNS. Their disapproval led to her request for a transfer to civilian work assisting the arriving United States Army in Gloucester, Cheltenham. Morrish was later in Paris on VE Day and toured France and Germany immediately following the war. In a telephone interview conducted in June 2007, Hilda Morrish explained it was in Paris where she learned photography from American serviceman Albert Tarbox, a Major in the Engineer Corps.

The digitized material on this site includes images of black and white photographs taken by Hilda Morrish with a Voigtlander 35 mm camera. The photographs were developed and printed in a makeshift photo lab in a hotel bathroom. A bidet was used to wash the prints and an enlarger to magnify the images.  In addition to the thirty-nine digitized photographs, this site also includes two digitized letters signed by Dwight D. Eisenhower as Supreme Commander Allied Expeditionary Force.

View a full description of the Hilda Morrish fonds