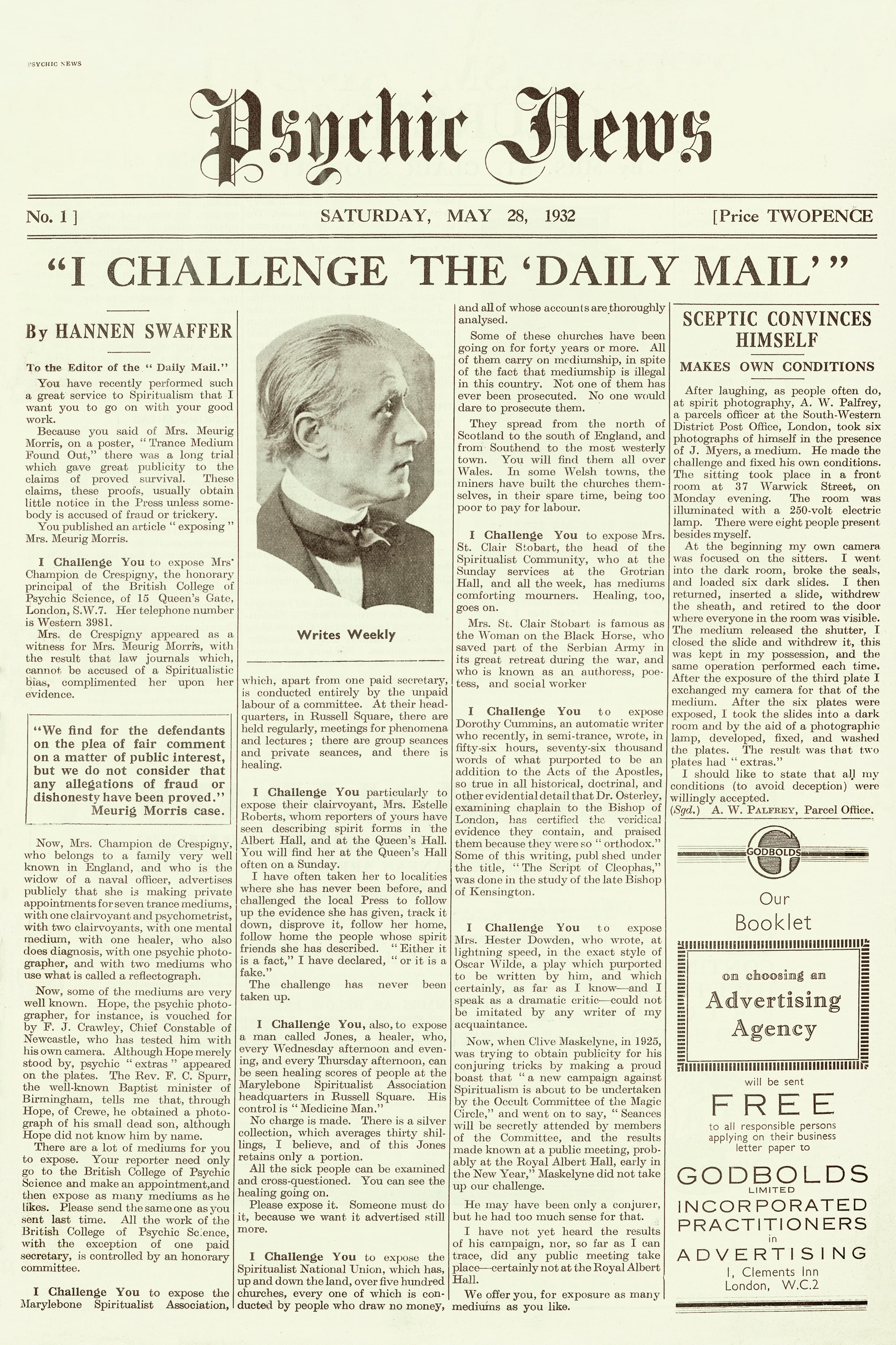 Please note that several pages are missing due to missing physical copies. For issues with a double-page spread, those pages are displayed together instead of as separate pages. To reference PN, please use the page numbers printed on the newspaper rather than the metadata provided.

If users have any questions, please contact the University of Manitoba Archives & Special Collections at archives@umanitoba.ca for more information.

The UK-based Psychic News (PN) was first published as a weekly newspaper for Spiritualists on Saturday, 28 May 1932, with the support of top Fleet Street journalist Hannen Swaffer. Its founding editor, Maurice Barbanell, was also a gifted trance medium, and famous Spiritualist author, J. Arthur Findlay, helped him finance its launch. PN boasted a record of continuous publication for 78 years, with only two issues missed during February-March 1947 due to a fire in a London office building.  It ceased publication with issue number 4066 in July 2010.  A successor company, Psychic Press Ltd., resurrected the publication in December 2011. Today, PN continues as a monthly magazine, available both through print and digital subscriptions: https://www.psychicnews.org.uk/

The Psychic News Digital Archive comprises 4,125 items when special advertising supplements and book lists are counted.  It offers a rich source for historical study of Spiritualism and psychical research, both within the United Kingdom and internationally.  Biographers will discover tributes to Spiritualist mediums, healers, and church leaders, many of whom were previously difficult to trace, as well as well-known figures associated with, for example, the Thomas Glendenning Hamilton Family’s psychical research experiments in Winnipeg, Manitoba.

PN regularly featured articles about evidence of life after death obtained through mediumship and various forms of spirit communication, as well as spiritual healing, the psychic gifts of clairvoyance, clairaudience, and clairsentience, automatic writing and drawing, psychic and spirit art, psychokinesis, ectoplasm, materialization, reincarnation and other paranormal topics.  The newspaper’s pages celebrate the successes of the Spiritualist movement; they also document the controversy and disappointment when séance-room fraud was uncovered.

From the early 1940s through 1970, the PN tagline boasted that it was the Spiritualist newspaper with the world’s largest net sales or circulation.  In the decade that followed, the tagline claimed over 100,000 readers.  From August 1981, PN was “Britain’s only independent Spiritualist weekly.”

The PN archives (1932-2010) are owned by Psychic Press Ltd.  The University of Manitoba Libraries hosts and maintains the digital collection through UM Digital Collections: https://digitalcollections.lib.umanitoba.ca/islandora/object/uofm%3A2939726

The PN digital archives for 1932-2010 are now available, and can be accessed through UM Digital Collections.

Thanks are due to Senate House Library, University of London, which loaned its Harry Price Collection unbound newspaper copies to the project to facilitate a significant portion of the scanning.  The Survival Research Institute of Canada and File IT Solutions, both of Victoria, BC, compiled and crunched the data to ensure that every issue was located and scanned.