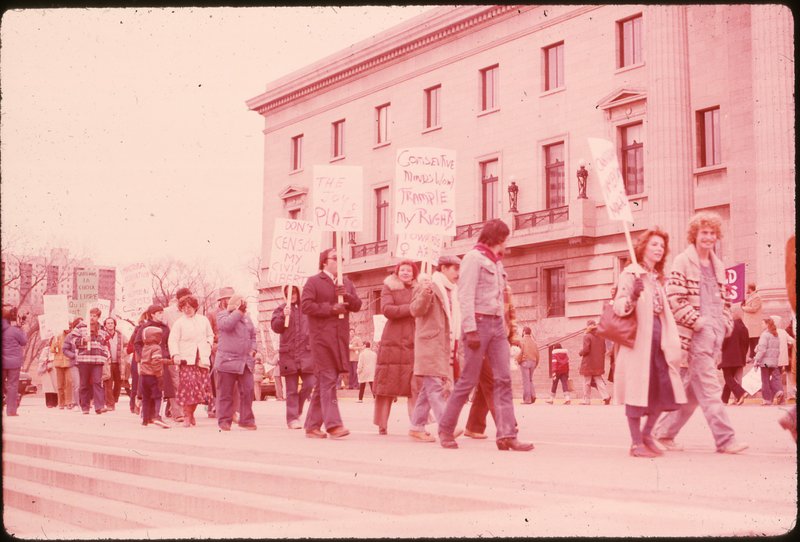 Both GFE and Happenings Social Club were mixed, welcoming lesbians and gay men, however the organizations were predominantly male-operated. An exclusively lesbian organization, A Women’s Place, later known as The Winnipeg Lesbian Society, held its first women-only social event at the Continental Motor Hotel on November 5th, 1976. Like GFE, the Lesbian Society held radical gay liberation politics which informed their activism, leading to pickets and demonstrations against exclusionary organizations and government policy. A particularly notable action which the Lesbian Society was involved with was the protest of Christian conservative Anita Bryant in 1978. The counter protest involved some 350 marchers, a record for gays in Winnipeg. A benefit music festival for Lesbian Mothers was held concurrently on April 30th in opposition to Bryant’s appearance and persuaded the Eaton’s ticket office to sell festival tickets for as long as Bryant tickets were being sold. Lesbian specific events and groups were hosted at The Winnipeg Women’s Building at 730 Alexander Avenue until its closing in 1983. The Lesbian Society also took part in the well-attended demonstration against the Winnipeg police and Attorney-General Gerry Mercier’s request that bookstores remove The Joy of Gay Sex and The Joy of Lesbian Sex after a woman reportedly complained when she inadvertently opened the wrong book when looking for The Joy of Cooking at Classics Bookstore in the fall of 1979. Shortly after The Winnipeg Women’s Building closed, a lesbian venue called Ms. Purdy’s opened at 266 Main Street in January of 1984 and provided space for women artists to perform. By April, the club had more than 200 members and continued to thrive as the only lesbian social space in Winnipeg. Ms. Purdy’s relocated to 272 Sherbrook Street in 1990 where it remained until it closed in August of 2002.