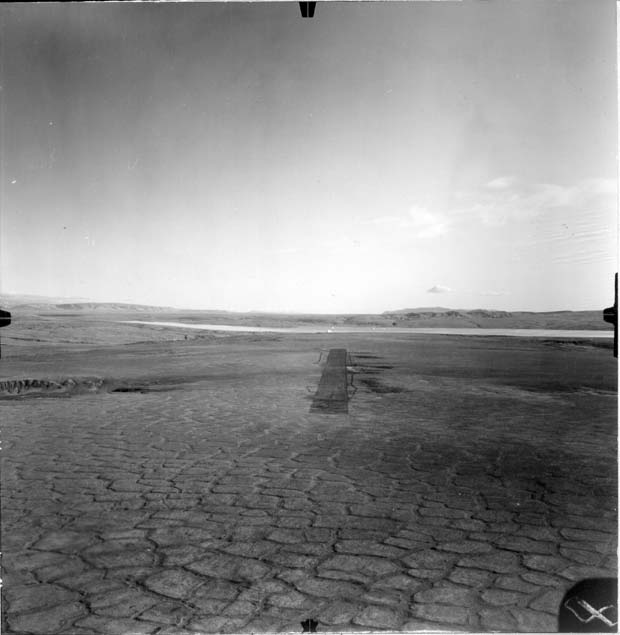 Looking southwards along the 5,000 foot long winter airstrip built at Slidre Bay, Ellesmere Island (Lat 80 05N, Long 85 45 W) by 3 men in 30 days using baby bulldozers, a small scraper and a grader. The strip is 150 feet in width, and the 500 foot lengths at either end of it had been cleared of boulders and but roughly graded, leaving a 4,000 foot finished length. It would be possible to extend the strip at this northern end by another 2,000 feet if necessary. The strip has a bearing of 163-343 and is 450 feet above sea level, and about 5 miles distant (NE) from the weather station. It was reported hard frozen and serviceable on 10 September, 1947. In the foreground the silty soil, containing very little sand, has been dried up to such an extent that the ground has been divided into polygones by depression one to two feet in depth and from 3 to 6 feet across. The site for has been well chosen, having unrestricted approaches and being well drained towards both sides. Towards the left may be seen a part of a deeply gorged valley that lies below the high range of mountains which parallels the strip somedistance tp east. The tracks leading towards the camera were made by a weasel. [Not visible in scan.] Major A. Taylor, RCE. (caption typed below photograph)

photograph: b&w; photographs from an annotated album created during the course of U.S. Naval Task Force 68