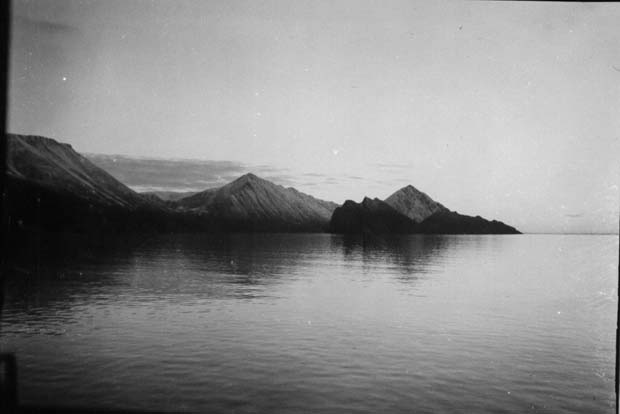 The setting rays of the sun catch the jagged summits of the mountains of Baffin Land along the southerly shore of Pond Inlet. The Hudson Bay Comapny settlement lies to the left around the most distant headland, a pretty little village of whitewashed buildings strung out like beads below a hundred foot bank forming the shore of the inlet. A small gasoline cache of more than 3,000 gallons of aviation fuel was laid by the Edisto at Pond Inlet for the Royal Canadian Air force. Anchoring close inshore in the darkness, the uploading was done in the night within a few hours. Ship's parties were well received and given a hospitable welcome by both the Post Manager, and his wife, and by the two constables stationed by the Royal Canadian Mounted Police at Pond Inlet. (caption typed under the photograph)
Major A. Taylor