Archives of the Agricultural Experience: Agriculture & the U of M 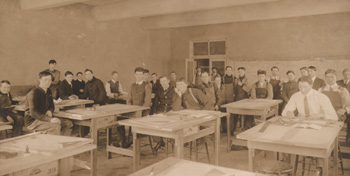 Agriculture and the University of Manitoba

The Archives contains over 2000 processed files covering all departments in the Faculty of Agriculture. The Collection spans from the turn of the century until 1990. The Faculty of Agriculture Students' Organization dates back to 1906, containing council minutes from 1932-1985. There are several university publications that pertain to Agriculture. Journals like the M.A.C. Gazette,Managra, Agra Vox and Agro-Echo, document the student life of an "Aggie." The Fred F. Parkinson collection contains the lecture notes of the former Manitoba agriculture student from 1913-1916. The Robson Family collection contain playbills and programs from various Manitoba Agricultural College activities between 1914-1916. Lists of agriculture graduates can be found in the University of Manitoba Convocation programs. The Faculty's photograph collection offers images from the original Agricultural College's Tuxedo site and the current Fort Garry campus. The University of Manitoba Faculty of Agriculture Women's Clubs records (1924-1954) contain minute books of meetings. UA 21 is augmented by the personal papers of retired professors, J.H. Ellis, Len Shebeski, and Sol Sinclair.

Faculty of Agricultural and Food Sciences