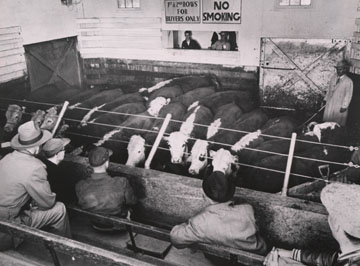 In 1911, an act was passed by the Manitoba government incorporating the Public Markets Ltd. The plan was to furnish Manitoba livestock producers with a market-place, in an area where there was a need for selling and handling facilities to accommodate a growing industry. The two national railways financed and developed a 137 acre site purchased by the City of Winnipeg that was referred to in the land title records as the 'Roman Catholic Mission Property'. On August 14, 1913, the Marion Street facility with its stockyards and packing house was officially opened by Premier Sir Rodmond Roblin. For the next seventy-five years, the Union Stock Yards not only provided the City of St. Boniface with its largest single source of employers but became a vital cog in Manitoba's agricultural economy.

The livestock business in Manitoba owes its origins to the great cattle drives in the southwestern United States. The Dodge City/Western Trail led up into Alberta where it hooked up with the newly completed Canadian National Railway. Cattle were loaded on to freight cars and shipped to the markets in eastern Canada. Along the way the trains stopped off in Winnipeg to water and feed the cattle, giving rise to Manitoba's livestock industry. Winnipeg's first stockyard was located in the Weston area but space constraints and easier access to the rail lines necessitated the move to St. Boniface. The Union Stock Yards were the largest of their kind in Canada. The yard had its own private sell essential in providing the endless stream of water required.

In 1925, Canada Packers opened a meat processing plant next to the yard and thirteen years later they were joined by Swifts. The Second World War brought unprecedented growth to the packing industry as Canada supplied meat for the troops overseas. The yards represented a large cross-section of livestock interests. Within its structure were numerous salesmen, buyers, producers, and employees of the trade and yard company. The Canadian Department of Agriculture also provided two essential services. Veterinarians performed health inspections and a daily market report was prepared to inform the industry on livestock values and prices. Truck and brand inspections were carried out by representatives of the provincial governments. The market had its own Livestock Exchange to supervise trading. Its membership included buyers for all kinds of stock as well as bonded commission firms and dealers.

The livestock received and sold at Union Stock Yards came from all three prairie provinces, destined for either the local market, eastern Canada, or, under favorable exchange and trading conditions, the United States. The principal requirement locally was to provide slaughter cattle for the processing plants. However, under good weather and feed conditions, there was a significant turnover of cattle back into the Manitoba feed lots for finishing. The eastern Canada market was constant year round with upwards of 300,000 cattle and calves shipped annually. The yard was also the largest exporter of feeder cattle in Canada with steady sales to Iowa, Minnesota, and Nebraska.

Failure to keep up with technological advancements and the advent of refrigerated trucks conspired to end Union Stock Yards dominance of the industry. Trucks took over as the principal means of beef shipping with the completion of the Trans Canada Highway in 1955. The meat packing industry began to move closer to the source of its product as plants in Alberta supplanted Winnipeg processors. Manitoba hog processing still remains a viable industry but the Union Stock Yards, Canada Packers, and Swifts beef processing plants had outlived their usefulness by 1990.

The Public Markets Ltd. collection spans the existence of the company from 1912-1989. The collection now comprises 21 linear feet. This collection is unique of its type in western Canada and offers a unique reference source to the agricultural history of the prairie west. The records contain detailed information on livestock transportation and sales, collective bargaining agreements, labour grievances and arbitrations, as well as environmental concerns in dealing with waste disposal. 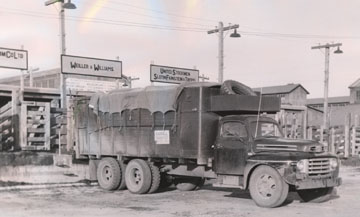