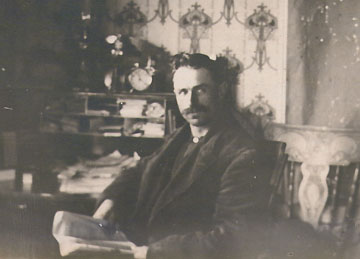 Julius Degen was born April 7, 1876 in Worms, Germany. At the age of nineteen, he emigrated with his two half brothers to the United States, eventually settling at Sibley, Iowa. It was in Iowa where he met the Schreiber family, becoming well acquainted with Albert (A.G.). Albert Schreiber soon moved to Manitoba to work for the wealthy banker, H.L. Emmert, as a farm manager. When Albert heard of a second vacancy in Manitoba, he recommended Julius Degen. From Iowa, Degen moved to Manitoba where he was given charge of the La Salle Farm, one of the three Emmert farms. The H.L. Emmert Land Company was established by the wealthy Sibley banker, H.L. Emmert. He bought vast holdings in the Red River and Assiniboine River valleys in hopes of selling to American farmers. Within the Macdonald municipality, Emmert owned three experimental farms.  The most prominent and experimental, under the guidance of Schreiber, was situated at East Oak Bluff; the second was a stock farm at Oak bluff which was famous for its shorthorn cattle, Berkshire hogs and registered thoroughbred horses, all of which fared well at the various agricultural exhibitions; the third, a mixed farm, was run by Degen. These experimental farms were visited by faculty from the Manitoba Agricultural College, E. Cora Hind, American farmers on educational tours, and by local and district farmers. Through these experimental farms, Manitoba farmers gained a richer knowledge of their trade, benefiting from new crops and from new procedures, such as summerfallowing.

The collection is arranged into three series. First and foremost are the personal and business papers and diaries of Julius Degen. A second, smaller portion contains material relating directly to the Emmert Land Company, for whom Degen worked. The third section of this collection, photographs, has been separated according to storage and conservation principles and held as PC 90. Fortunately, virtually every photograph has been identified by the donor.