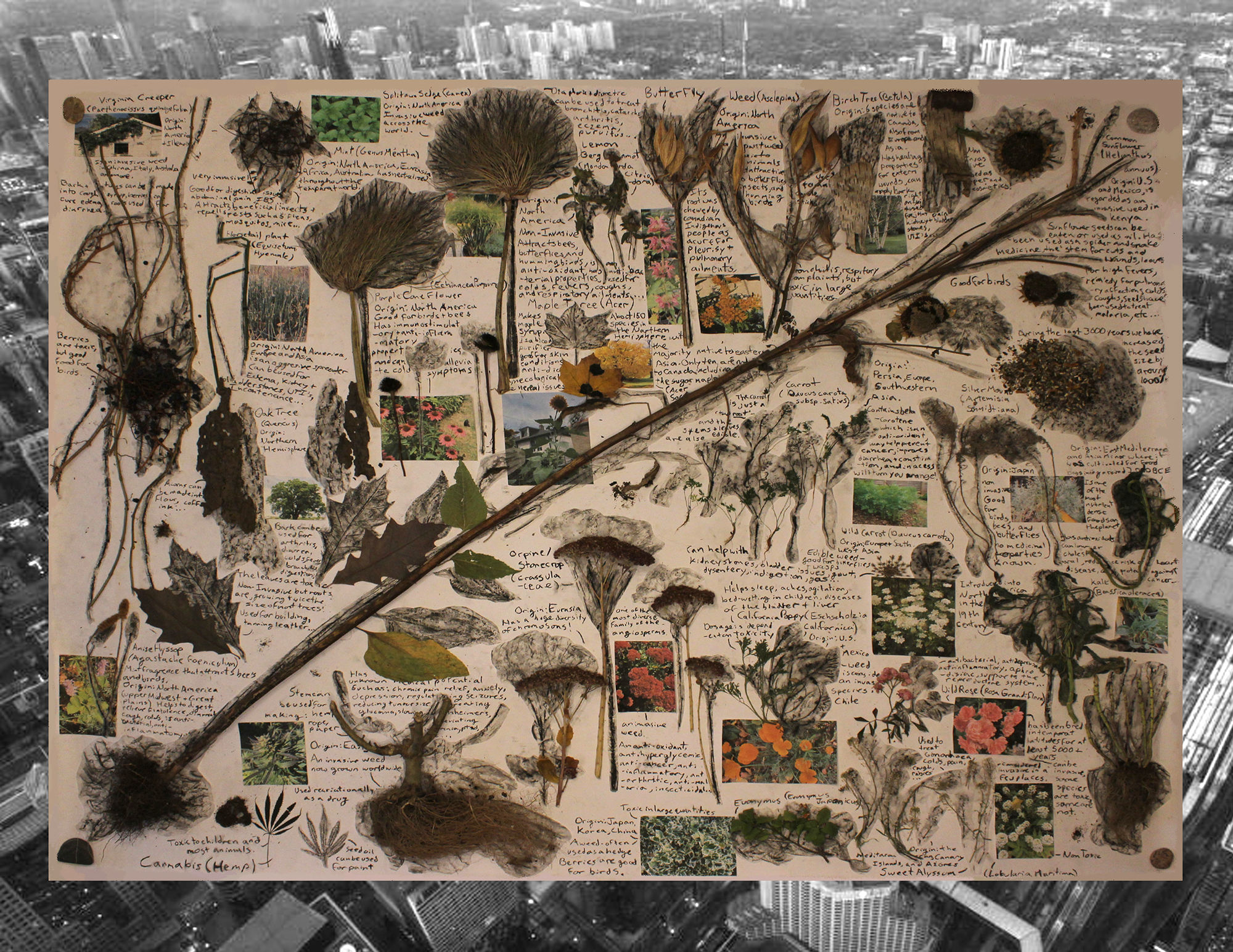 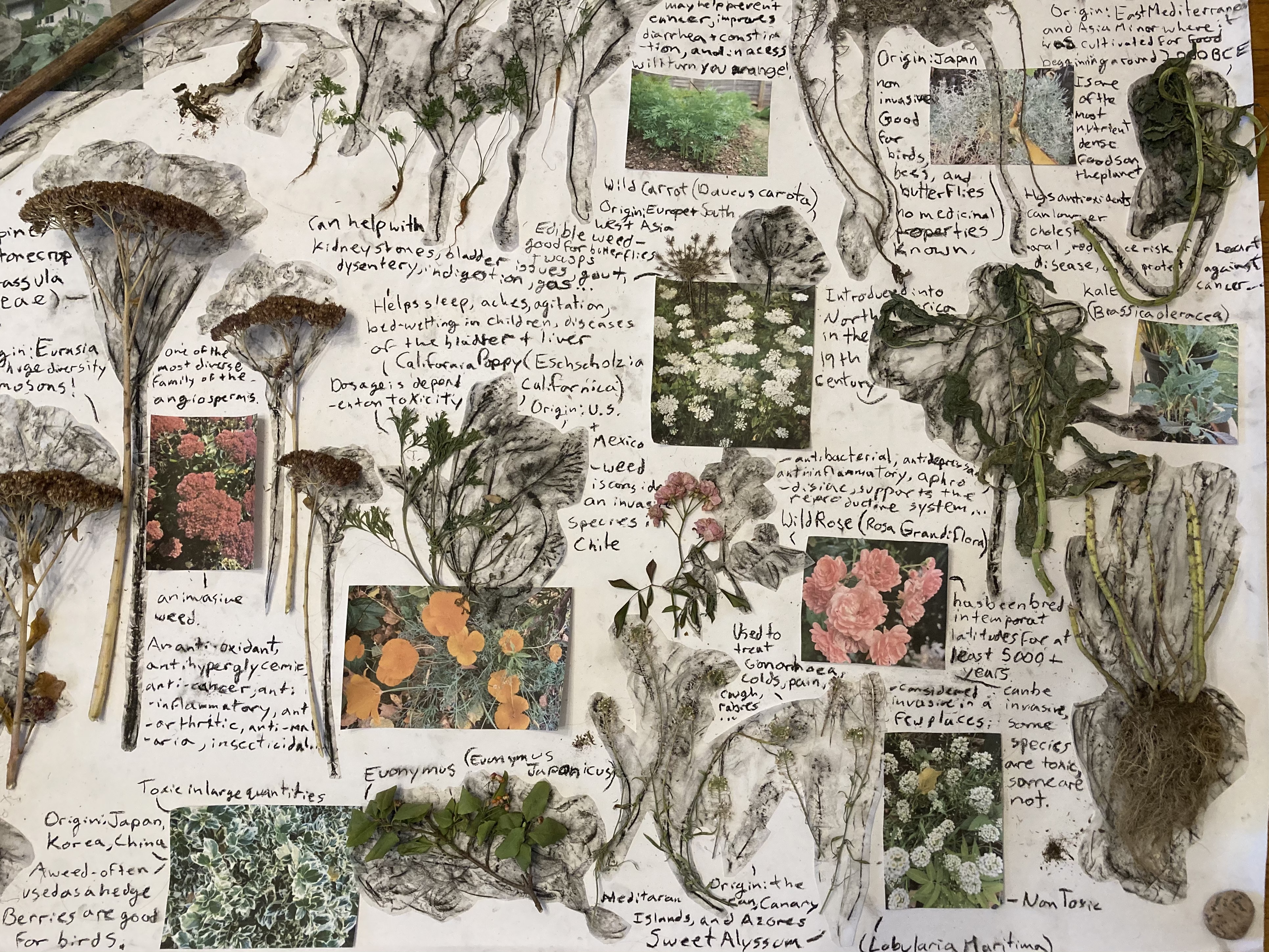 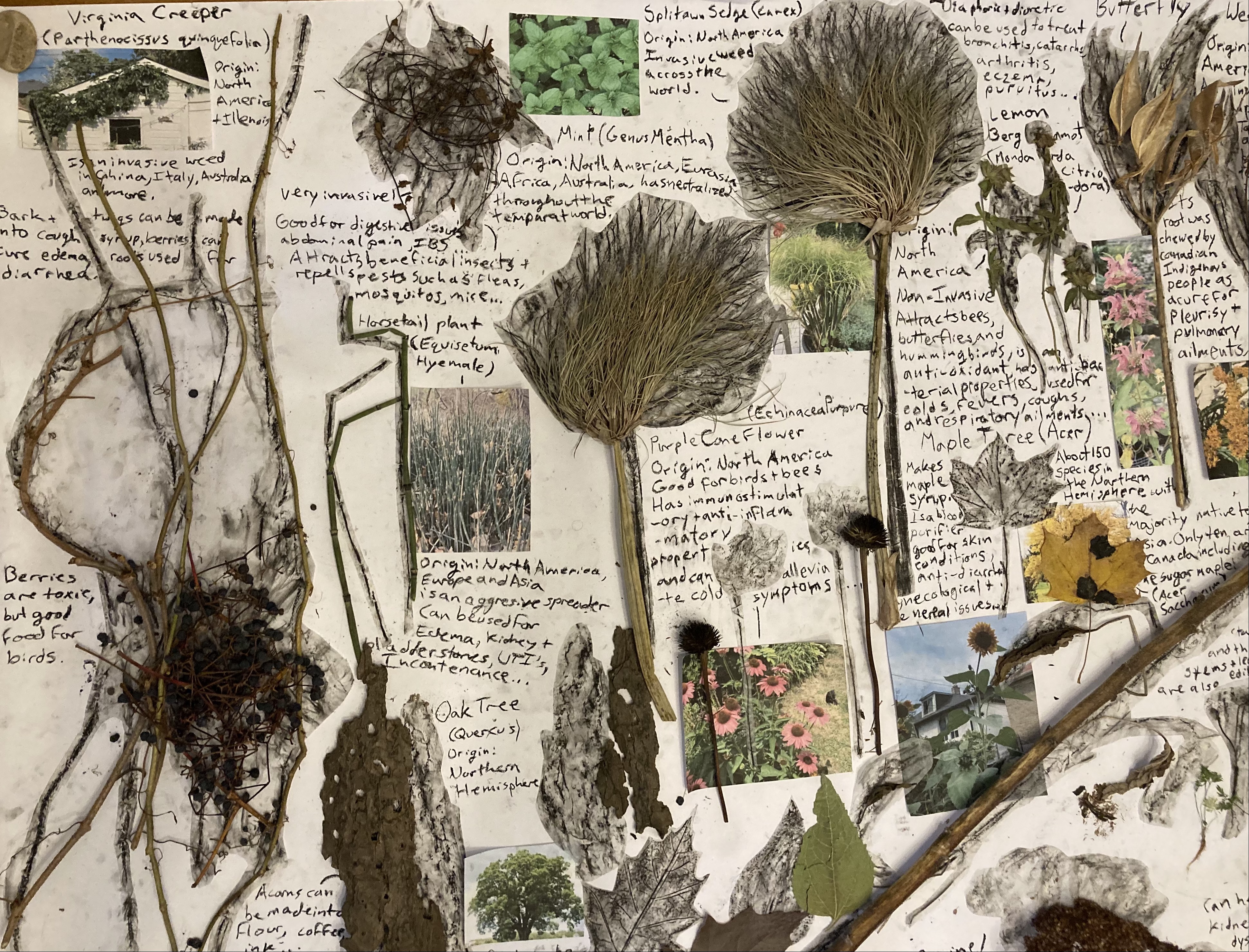 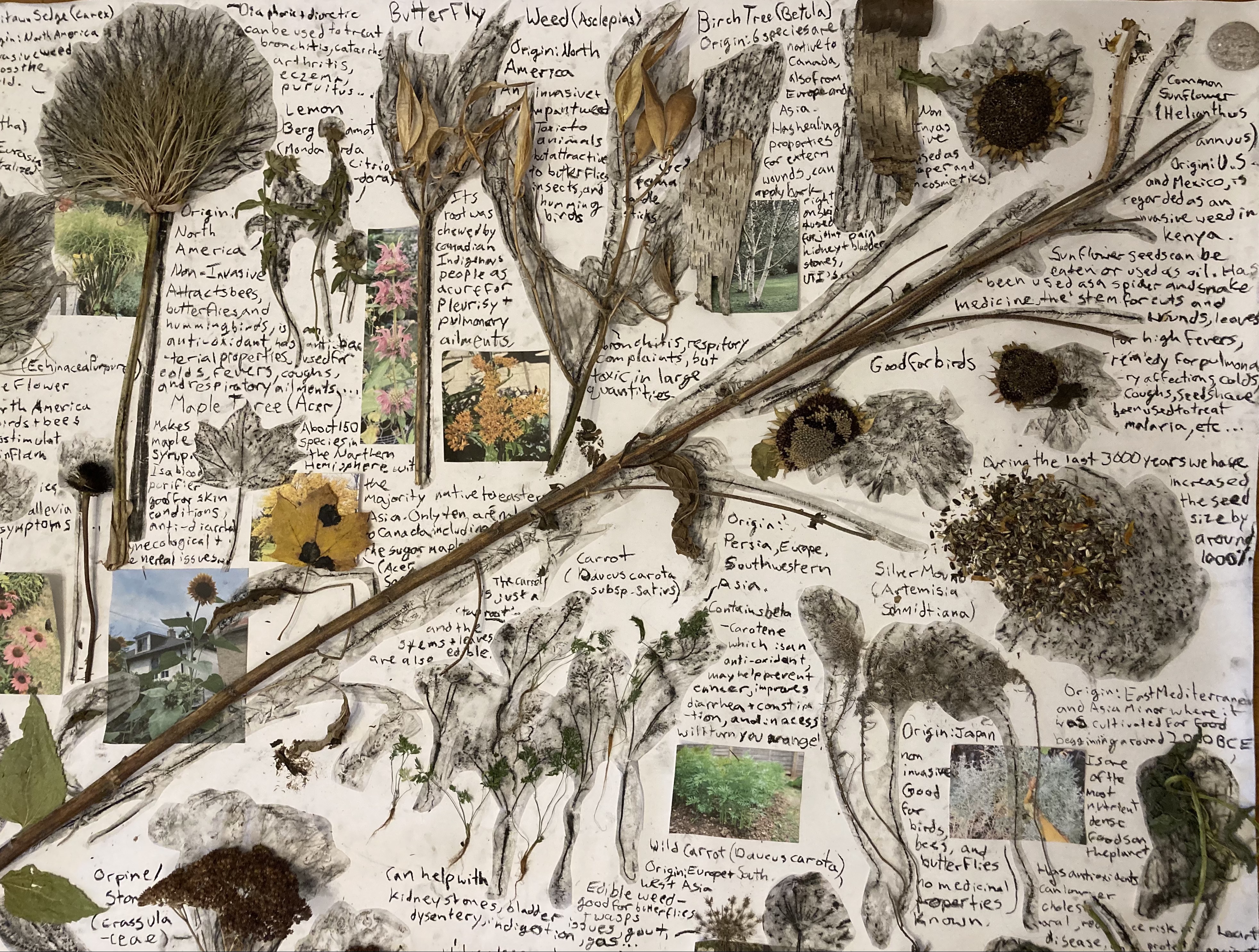 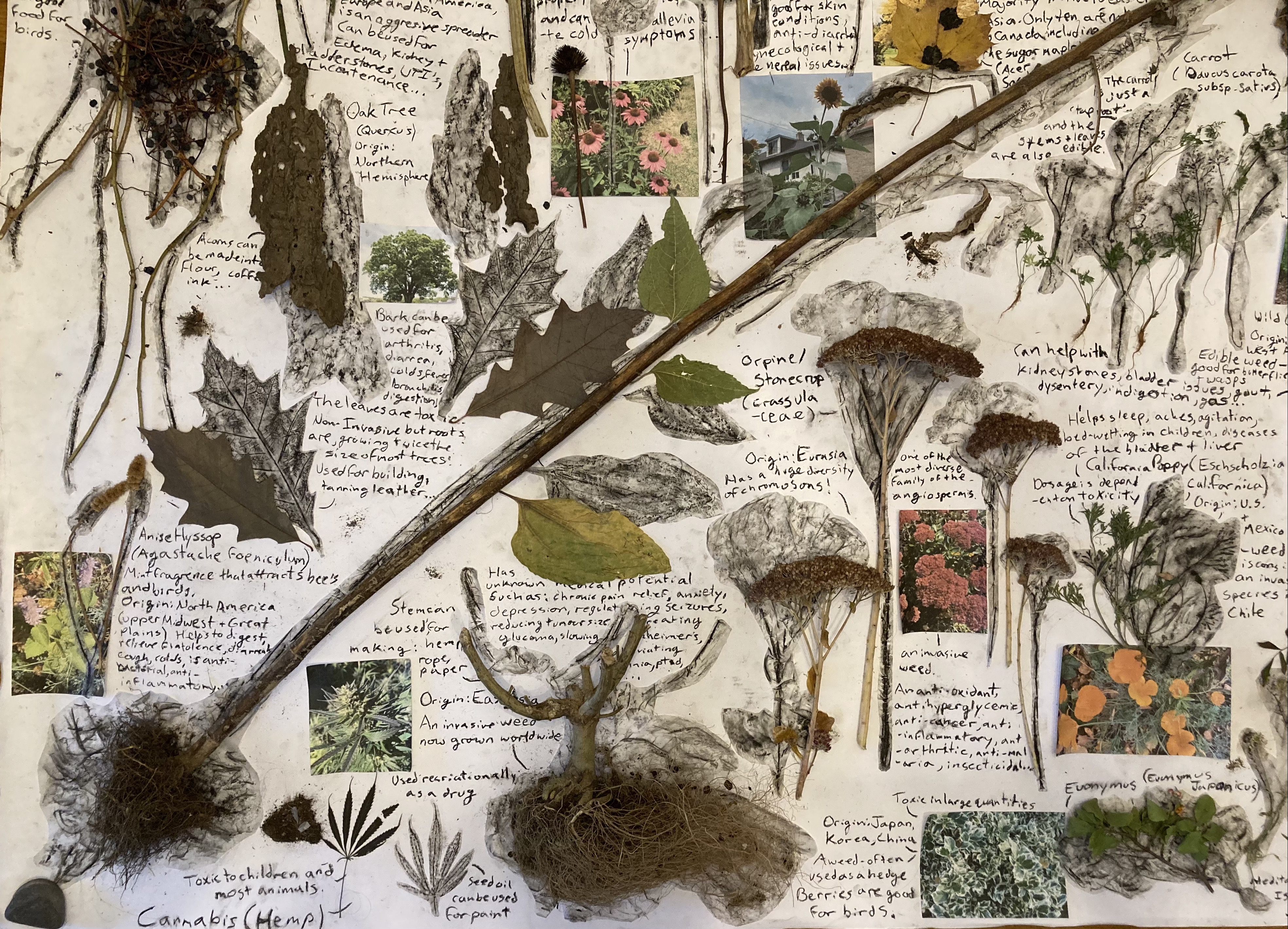 Look outside and what do you see? Where did it come from and why is it here? Should it be here, I mean what even is it. What can it do and what is it doing? Can it be helpful, or is it invasive, eliminating local species? Isn’t it beautiful? How can I make use of this, how is this plant connected to me? Harvest it before it decomposes getting ready for next year. Look at it in the sun and see its shadow. Maybe it won’t grow again next year. Maybe I can put it in a tea. Maybe it’s invasive and I will kill it. Maybe it is special or maybe it is a weed. What if it is good for birds, bees and butterflies, medicinal for humans? What if it is toxic to touch? Half my garden is here because of globalization and species elimination. But thank goodness it is a garden.

Virginia Creeper (Parthenocissus Quinquefolia)
- Origin: North America and Illinois
- Is an invasive weed effecting China, Italy, Australia, and more.
- Berries are toxic but good food for birds.
- Bark and twigs can be made into cough syrup, the berries can cure Edema, and the roots can be used for diarrhea…

Butterfly Weed (Asclepias)
- Origin: North America
- Can be used to make candlesticks.
- An invasive and rampant weed.
- Toxic to animals but attractive to butterflies, insects, and hummingbirds.
- Its root was chewed by Canadien Indigenous people as a cure for Pleurisy and pulmonary ailments, bronchitis, respiratory complaints, but toxic in large quantities.

Oak Tree (Quercus)
- Origin: The Northern Hemisphere
- Bark can be used for arthritis, diarrhea, colds, fever bronchitis, digestion…
- The leaves are toxic.
- Non - Invasive but roots are, growing twice the size of most trees.
- Used for building, tanning leather, acorns can be made into flour, coffee, ink…

Lemon Bergamot ( Mondarda citriodora)
- Origin: North America
- Attract bees, butterflies, and hummingbirds.
- Not invasive.
- Is an anti-oxidant and antibacterial properties, has been used for coughs, colds, fevers, and respiratory ailments…

Maple Tree (Acer)
- About 150 species in the Northern Hemisphere, with the majority native to Eastern Asia. Only ten are native - to Canada including the sugar maple (Acer Saccharum).
- Makes maple syrup.
- Is a blood purifier, good for skin conditions, anti-diarrhea, for gynaecological and venereal issues…

Common Sunflower (Helianthus annuus)
- Origin: U.S. and Mexico, is regarded as an invasive species in Kenya.
- Good for birds.
- Sunflower seeds can be eaten or used as oil. Has been used as a spider and snake medicine, the stem for cuts and wounds, leaves for high fevers, remedy for pulmonary affections, colds, coughs, seeds have been used to treat malaria, etc…
- During the last 3000 years we have increased the seed size by around 1000%

Orpine / Stonecrop (Crassulaceae)
- Origin: Eurasia
- An Invasive weed.
- Is an anti-oxidant, antihyperglycemic, anti-cancer, anti-inflammatory, anti-arthritic, anti-malarial, insecticidal…
- Has a huge diversity of chromosomes! One of the most diverse family of the angiosperms.

Carrot (Daucus carota subsp. sativus)
- Origin: Persia, Europe, Southwestern Asia.
- The carrot is just a ‘taproot’… and the stems and leaves are also edible.
- Contains beta-carotene which is an antioxidant and may help prevent cancer, improves diarrhea and constipation, and in access will turn you orange!

Kale (Brassica Oleracea)
- Origin: Eastern Mediterranean and Asia Minor where it was cultivated for food beginning around 2000 BCE.
- Introduced into North America in the 19th century.
- Is one of the most nutrient dense foods on the planet.
- Has antioxidants and can lower cholesterol reduce the risk of heart disease, can be protective towards cancer…

Wild Rose (Rosa Grandiflora)
- Has been bred all over the world for centuries.
- Grown in temperate latitudes for at least 5000+ years.
- Is antibacterial, antidepressant, anti-inflammatory, aphrodisiac, supports the reproductive system…
- Can be invasive, some species are toxic and some are not.