Archives of the Agricultural Experience: Agriculture in the Prairie Provinces 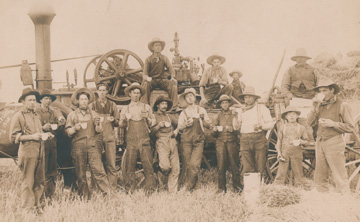 AGRICULTURE IN THE PRAIRIE PROVINCES

Early in the 19th century, pressure was exerted on the Hudson’s Bay Company from both British Government and Eastern Canada to test out the vast area of Rupert's Land (current day Manitoba, Saskatchewan, Alberta and the Northwest Territories) for agricultural settlement. Lord Selkirk, having already established a successful settlement in Prince Edward Island, was granted 116,000 square miles of land by the Hudson's Bay Company. The plan for the settlement was to grow wheat, hemp, and wool for export. The settlers endured a litany of disasters from early frosts to plagues of grasshoppers, passenger pigeons, and mice. The settlers also faced near starvation and twice had to retreat up Lake Winnipeg to Jack River. However, in 1814, the colony harvested 23 10-gallon kegs of wheat, the first recorded production of the grain in the west.

In 1820 the colony's seed grain was destroyed and members of the settlement trekked to Wisconsin by snowshoe to secure seed. They brought back 250 bushels in flat boats, coming by way of the Mississippi and Minnesota Rivers, Big Stone Lake, and the Red River before finally reaching the Selkirk colony in June. The seeds were sown immediately and produced a fine crop. From that date forward, wheat production on the Prairies has moved steadily forward.

In 1868, Red Fife wheat, with its sterling reputation for superior milling and baking qualities, debuted in Manitoba. Eight years later, 857 bushels of Red Fife was shipped to the Steele Briggs Co. of Toronto to be used as seed. This marked the first shipment of wheat from the Province of Manitoba. The following year, the first shipment of Manitoba wheat was made to Great Britain. The wheat travelled by Red River Steamer to St. Paul. By 1879, the first grain elevator in western Canada was erected in Niverville, Manitoba. Two years later, Ogilvie Mills established the first flour mill in western Canada in Winnipeg.

In 1884, the Canadian Pacific Railway was completed to the east and the first shipment of wheat to Britain by an all-Canadian route was undertaken. As early as 1879, the volume of grain being produced in Manitoba was sufficient to warrant merchants devoting their whole time to the supply and demand for grain. These specialized grain merchants erected "flat warehouses" with a capacity between 1,200 to 15,000 bushels. The Winnipeg Grain Exchange opened in 1887.

Up until 1896, all the elevators on the Prairies, with the exception of those owned by Ogilvie Milling Co. and the Lake of the Woods Milling Co., were owned by individuals. That year a new phase in the elevator operation began with the inception of the Line Elevator companies, which were formed to own, operate, and manage groups of elevators. These Line Elevator Companies formed the North West Line Elevator Association in 1899 and set specific rules and regulations of business conduct for their members.

The turn of the century saw the first Royal Commission established to investigate grain handling in the west. This was the forerunner of the present-day "Canada Grain Act" and the Board of Grain Commissioners. In 1904, the "Futures" market started on the Winnipeg Grain Exchange. In 1914, with the opening of the Panama Canal, the Dominion Government built a Grain Terminal in Vancouver. The Prairies produced 300 million bushels of wheat for the first time in 1915. Two years later, the first shipment of prairie wheat to the United Kingdom via the Panama Canal was shipped from Vancouver on the American freighter, the "War Viceroy".

In 1921, the Agricultural Institute of Canada was formed. In the next two years, the three Prairie Wheat Pools were set up. In 1925, the Dominion Rust Research Laboratory opened in Winnipeg and ten years later the first rust-resistant wheat, "Thatcher", was introduced. By 1928, the Prairies were producing over 500 million bushels of wheat. In September 1943, trading was suspended on the Winnipeg Grain Exchange and compulsory state marketing began.

Agriculture remains the life's blood of the Prairie economy. While fear of attack and locust plagues are a thing of the past, it still remains a precarious livelihood.

"The heartland of the old ranching frontier was the foothill country of southwestern Alberta, where the sheltered well-watered valleys and the chinook winds which bare the hills of winter snow combine to make it one of the continent’s preferred stock-raising areas." John and George MacDougall are credited with bringing the first small herd of cattle and horses up from Montana to Morleyville in 1871-1872. In 1874, the North-West Mounted Police detachment opening provided the two essential ingredients required in ranching - a small local market and security for grazing. The signing of Treaty No.7 in 1877 provided further security for ranchers. Many police officers remained in the area to ranch once their enlistment expired.

Access to distant markets was assured when the Canadian Pacific Railway reached the Prairies and the first beef shipment to Great Britain was undertaken in 1887. Led by Senator Matthew Cochrane, Canadian businessmen applied for grazing leases provided through the Dominion Land Policy. The golden age of ranching ran between 1881-1897 with great cattle companies like Cochrane, Bar U, Oxley and Walrond ranches in Alberta and the Hitchcock and Matador ranches in Saskatchewan dominating the Canadian Plains. The election of Wilfred Laurier’s Liberal government in 1896 brought unrestricted settlement to the Prairies putting an end to the vast spreads.

Today, ranching has diversified to include llama, elk, buffalo, horse, emu, and ostrich. Alberta remains the country’s chief producer of beef cattle and feed, accounting for roughly 40% of the national total. Saskatchewan is the second leading producer with roughly 24%.

Pigs have been a part of Manitoba’s history dating back to the Selkirk Settlers. Seventy pigs arrived on the shore of Hudson’s Bay in 1819 and were loaded on to York Boats for the 1000 kilometer journey southward to the Red River Settlement. The pigs were fed acorns gathered by the settlers over the first winter.

The orderly marketing of Manitoba hogs began in 1965 with the establishment of a Hog Commission initially overseen by a government appointed Board of Directors. In 1972, it was reorganized and named the Manitoba Hog Producers Marketing Board. Producers elected their own delegates and directors. In 1989, the name was changed to Manitoba Pork. In February 1999, Manitoba Pork split into the Manitoba Pork Marketing Co-op and the Manitoba Pork Council. Slaughter was expected to exceed 3 million head in Manitoba in 1999 while the pig herd topped 2.1 million in 1998. The pork industry plays an important role in Manitoba’s economy generating over 1.2 billion dollars for the provincial economy and employing 12,000 Manitobans.