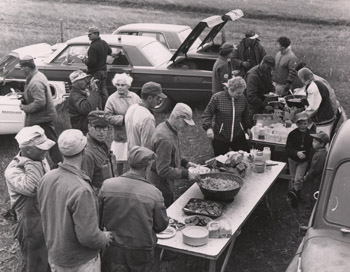 The lone farmer out working the land in the attempt to eke out an often precarious existence had little power and not much support. It quickly became apparent to many agricultural businesses and farmers that there was power and safety in numbers and that a good crop yield with easy access to transportation and elevators for storage benefited all farmers and ultimately the nation's economy.

Farmers and agri-businesses began to band together to form associations and cooperatives which would produce and market agriculture commodities on behalf of farmers, or would serve as agricultural advocates who developed and lobbied policies and activities that would assist the agriculture community.

The Archives holds the papers of the North-West Line Elevators Company, spanning the years 1899 to the mid-1970s. The collection of the United Grain Growers' Association covers the years 1906-1990 while the Manitoba Farm Bureau, donated by Keystone Agricultural Producers, operated from 1964-1984. Co-operative Vegetable Oils, donated by CanAmera Foods Ltd., served the Mennonite community from 1943-1985. The SMR Breeders' Co-op Ltd. contains insemination reports and financial records for 1952-1975. The Archives also holds the unprocessed papers of the Dauphin Agricultural Society, the Manitoba Cattle Producers Association, the Keystone Agricultural Producers, the Winnipeg Commodity Exchange Inc., and the Winnipeg Commodity Clearing Ltd.